Geography Class 6 Chapter 1 : The Earth in the Solar System

If we look at sky in the night it seems to be filled with tiny shining objects-some are bright, others are dim. They seem to be twinkling.

Once in a month, we see full moon night of a fortnight later, you cannot see it at all. It is a new moon night or ‘Amavasya’.

While watching the night sky, we notice various patterns formed by different groups of stars. These are called constellations. Ursa Major is one such constellation.

In ancient times, people used to determine directions during the night with the help of stars. The North star indicates the north direction. It is also called pole star.

Some celestial bodies do not have their own heat and light. They are lit by the light of the stars. Such bodies are called planets.

The sun, eight planets, satellites and some other celestial bodies known as asteroids and meteoroids form the solar system. 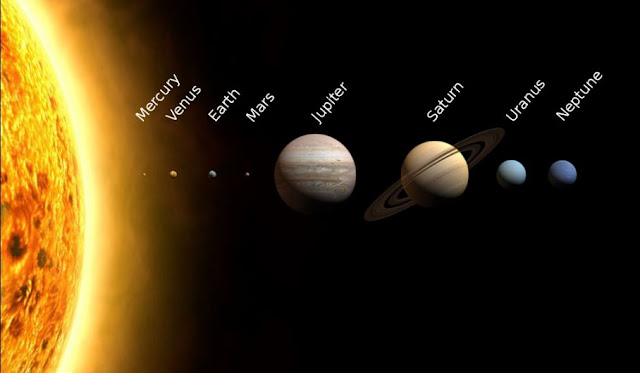 (i) The sun is the centre of solar system.

(ii) It is huge and made up of extremely hot gases. The pulling force of the sun binds the entire solar system.

(iii) The sun is the ultimate source of heat and light for the solar system.

(i) The word ‘planet’ comes from the Greek word ‘Planetai’ which means wanderers.

(iii) All the eight planets of the solar system move around the sun in fixed paths. These paths are elongated. They are called orbits.

(iv) Mercury is the nearest planet and Neptune is the farthest planet from the sun.

(v) Venus because of its shape and size is similar to the earth is considered as 'Earth's-twin'.

(iv) Till August 2006, Pluto was also a planet. But now it is called only a celestial body.

(i) The earth is the fifth largest planet in size while the third nearest planet to the sun and is our home.

(ii) It is slightly flattened at the poles. That is why, its shape is called Geoid.

(iv) From the outer space, the earth appears blue because its 2/3rds surface is covered by water. It is, therefore, called a blue planet.

(i) Our earth has only one natural satellite that is the moon.

(ii) It appears so big because it is nearer to our planet than other celestial bodies.

(iii) The moon moves around the earth in about 27 days and 8 hours. It takes exactly the same
time to complete one spin of earth. This makes only one side of the moon visible from the earth.

(iv) The moon does not have conditions favourable for life. The surface of the moon is covered with plains, mountains and depressions which is observable as shadows on full moon day.

(i) There are numerous tiny bodies which also move around the sun. These bodies are called asteroids.

(ii) They are found between the orbits of Mars and Jupiter.

(iii) The scientists believe that these are the parts of a planet, which are formed by the explosion of that planet many years ago. 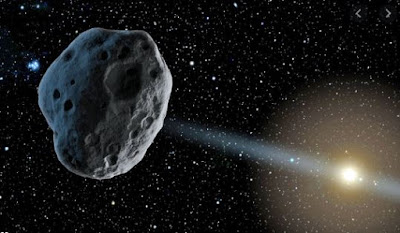 (i) The small pieces of rocks which move around the sun are called meteoroids.

(ii) Sometimes these objects come close to the earth and drop upon it. While dropping on the earth they get heated up and burn due to friction with the air and appear as a flash of light. Meteors sometimes do not get burnt completely and strike the earth surface creating a hollow.

A galaxy is a huge system of billions of stars, and clouds of dust and gases. These are millions of such galaxies that make the universe.

Our solar system is a part of Milky Way Galaxy. This galaxy is a cluster of millions of stars that appear as a glowing path across the sky on a clear night. 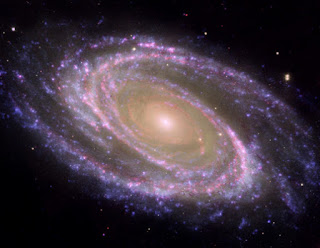